We had a BLAST at last night’s premiere for Entourage at the Warner Bros. Studios in Burbank. For this event, HBO gave us a few photos of the guys from Entourage and we did green screen photos of party guests with Vince and his “entourage”. Everyone who came by had loads of fun and they loved their photos.

A huge thanks goes out to Olivia, Chad and Monique with HBO, you guys were fantastic to work with. Also, thanks to our friend Scott who referred us! We have worked a few events for HBO and always love working with the people there, they are always fun yet very professional and organized – we love that! This was actually Bill’s second time photographing an event at the Warner Bros. Studios, so he was excited to be back. 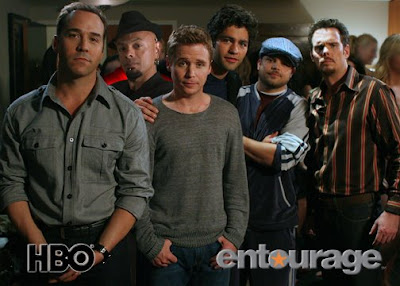 A funny thing happened yesterday afternoon. Bill got an IM from the best man at our wedding, Bobby, and it turns out he was in LA yesterday, just down the street from Bill’s office here. He dropped by to say hi and we found out that we are on the same flight back to Dallas this afternoon – life is full of funny coincidences, isn’t it? Now he has a ride to the airport :-).

On another note, we had two appointments set up for tomorrow, but our first one of the day had to cancel last minute… If anyone out there is interested in scheduling a last minute consultation for this Sunday, give us a call!