Jeanna & Brian have just returned from their Mediterranean cruise so I figured it was a good time to post the sneak peek from their wedding last weekend.  We loved every moment of their wedding ~ from the amazing morning light as Jeanna and the girls got ready to the choreographed first dance, not a detail was overlooked.  Once again, it was hard to choose just a single photo to wrap up the love and beauty of their wedding day, so I narrowed it down to three. First is an image taken while Jeanna was getting ready… 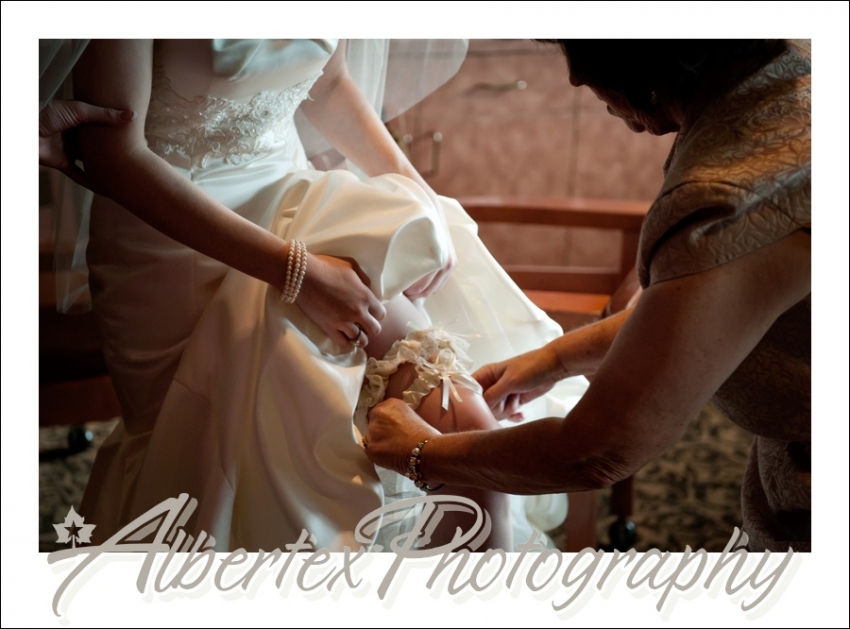 Next, I had to show off one of the images from their first dance – Jeanna is a dancer, so we were thrilled that she put her skills to good use. 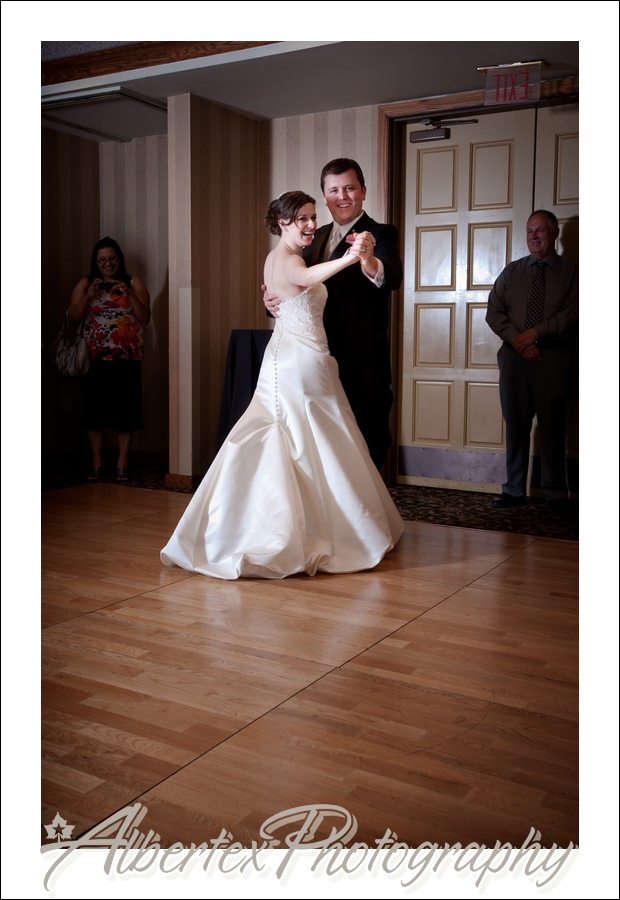 Finally, I can never resist a great departure. 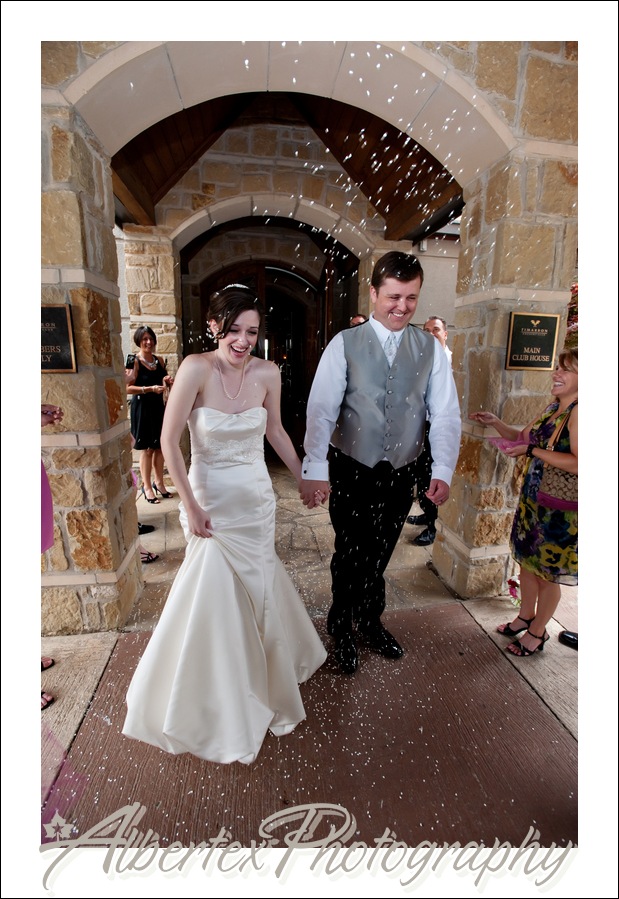 Whitney & Mark’s wedding was our last one for 2009 and we couldn’t have asked for a more touching and emotional wedding to end our year with. Their journey started five years ago on a van heading to Mexico, and last month they were married at the altar of the church that first brought them together…

As she waited and listened to the music in the sanctuary, Whitney wondered what Mark was feeling at that very moment. Was he anxious or nervous or excited? Maybe he was all three at the same time. She listened to the music and she knew exactly what point the slideshow was at. She also knew that Mark was still waiting his turn to walk up the aisle. She peaked around the corner to see if she could catch a quick glimpse of him and her heart leapt as she caught sight of him. She watched him pace for a few moments before she jumped back in excitement. This was it – her new life was about to begin!

Congratulations, Whitney & Mark – we have had a wonderful time getting to know you both and we know you will have a lifetime of love and happiness!

Whitney & Mark’s wedding was our last wedding for 2009 and we couldn’t have asked for a more touching and emotional wedding to end our season with. We are grateful they made us a part of their amazing day and we wish them a lifetime of happiness and love. I will have so much more to write about Whitney & Mark when I post their entire wedding so I will keep it short for now.  First, we caught the last bit of sunset when we arrived at the Shady Valley Golf Club in Arlington for the reception:

Whitney’s father-daughter dance – a slideshow of Whitney and her dad was playing on the screen in the background.

The music for her processional started and Rebecca took one last deep breath.  This was it – her turn had finally come to walk down the aisle! Her heart pounded as the doors to the sanctuary opened and she looked up to see Michael standing at the end of the aisle, waiting for her. Rebecca took one more deep breath and fixed her eyes on Michael’s smile as she started to walk. Everyone’s eyes were on her as her dad escorted her down the aisle, but she could only see one person.  Their day was finally here and she couldn’t wait to be standing next to Michael.

One of my favorite moments at a wedding are those few minutes after the ceremony where there is always so much love and joy that it is contagious. Congratulations, Rebecca & Michael and thank you for making us a part of your day – we couldn’t be happier for you (hope you enjoyed Antigua!)

She was a breath-taking vision, with her hair flowing and the light glinting off of the beads on her hand-beaded gown. Robert wondered one more time how he had managed to get so lucky. Jennifer smiled and looked up at him with that little tilt of her chin that is reserved just for him, and they both knew that everything in their world was finally coming together.

We had the great privilege of photographing Jennifer & Robert’s wedding last weekend at the Piazza in the Village, and it was a beautiful event for two beautiful people.  Thank you for making us a part of your day, we loved every minute of it!

As she was waiting for her turn in the makeup chair, Lindsey decided to pull out the card she was going to give to Jon later that afternoon.  It had a picture of a little boy and a little girl on the front and it could have been her and Jon all those years ago.  She thought again about what a coincidence it was that they had been in the same preschool class and didn’t know it – they even stood next to each other in the class photo!  Who would have know that the man of her dreams was actually the little boy from that class photo.  It must have been fate that brought them together again in high school and then again in college.

The day started with Lindsey and her girls at Halo Salon in Fort Worth and the laughter was everywhere.  It was the type of laughter that brings tears to your eyes – sometimes they were all laughing together and sometimes they were laughing at each other.  They made fun of each other, they made fun of their significant others, and most of all, they made fun of themselves… the perfect definition of a bridal “party”.  As the fun moved into the limo and on to Genesis United Methodist Church the mood changed a little and the love in the air became palpable.  Jon and the guys were hanging out on the other side of the church, anxiously awaiting their turn to walk down the aisle. The guests took their seats as the clock counted down the minutes and Lindsey took one final deep breath – it was finally time! Jon was waiting for her at the end of the aisle and they would soon be starting their journey through life together.

Lindsey & Jon – your day was perfect, just as it should be. There was an over-abundance of love, there were tears of laughter and joy, and most of all there was the two of you.  We adore both of you and are so grateful that you let us share this day with you. We know you have an amazing life ahead of you and you deserve the best that life has to offer – congratulations and all the best!

The guys hamming it up before the ceremony

We had a very cute ring bearer but he was not happy about doing photos.  In fact, he refused to do them.  And we were incredibly grateful to the very understanding parents, grandparents and bride & groom who didn’t force him into them (that NEVER works out well).  We did manage to catch this one when he stuck his head in, thinking we couldn’t catch him fast enough – ha ha ha ha ha – he was wrong!

Then on to the Ashton Depot to party the night away – and party they did!

Well, this will probably end up being at least a 3 part post.  We first met Kathy through a mutual friend a few years ago and we hit it off instantly.  Kathy is a flight attendant and was a confirmed single lady, and she was always happy to model for us when we needed it.  Imagine our surprise when she called us last year to tell us she was getting married!  We couldn’t be happier for Kathy & Mike – they are a perfect match for each other and we love them both dearly.  Thank you for making us a part of you very special weekend.  Here are a few pics from tonight’s cocktail party which was absolutely fabulous (best crab cakes EVER!!!!)  First are the uber-cute tuxedo gift bags for all the guests, then the secret corner with a glowing blue crystal ball – I assume they saw a wedding in their very near future…