Our Empire State of Mind – Part 2

Ok, I know Part 2 of our trip to NYC should have been posted a while ago (you can see Part 1 here). What can I say, we have been unbelievably busy and we aren’t complaining about it.  So, to pick up where we left off at with the first post ~ we started Sunday morning with breakfast at Tim Horton’s then headed to Grand Central Station to take the subway downtown.  Our plan was to be at the South Street Seaport ticket booth when it opened to get Broadway tickets for that night. Well, we were not too happy with we arrived to find a hand-written sign saying they were closed on Sundays, even though their website says they are open on Sundays (very irritating). No tickets for us, so we walked over to Ground Zero.  Although they are working on the Freedom towers and memorial it will not be open for another year and a half.  Very moving to think of all that went on there just 9 years ago. We spent some time at the 9/11 Memorial & Museum and I highly recommend it to anyone who visits the area. 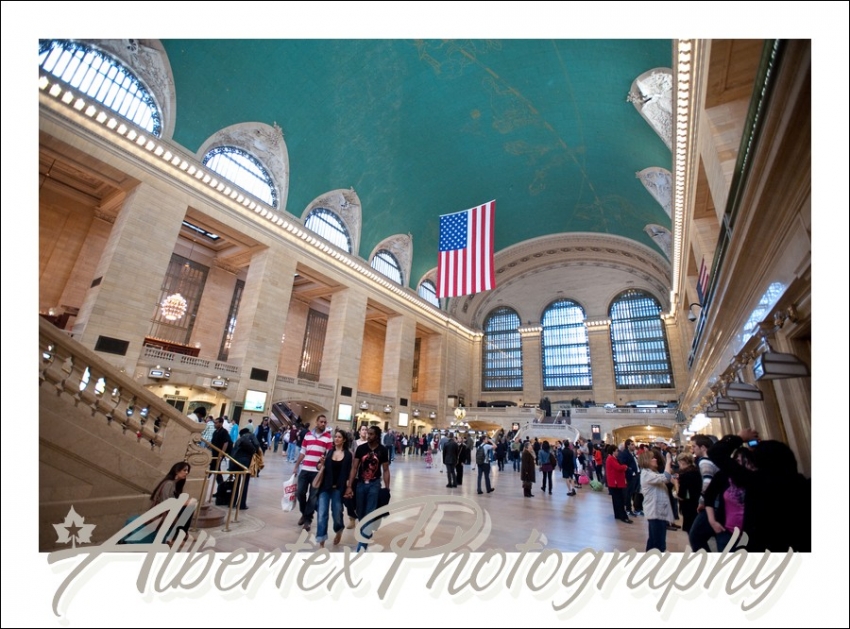 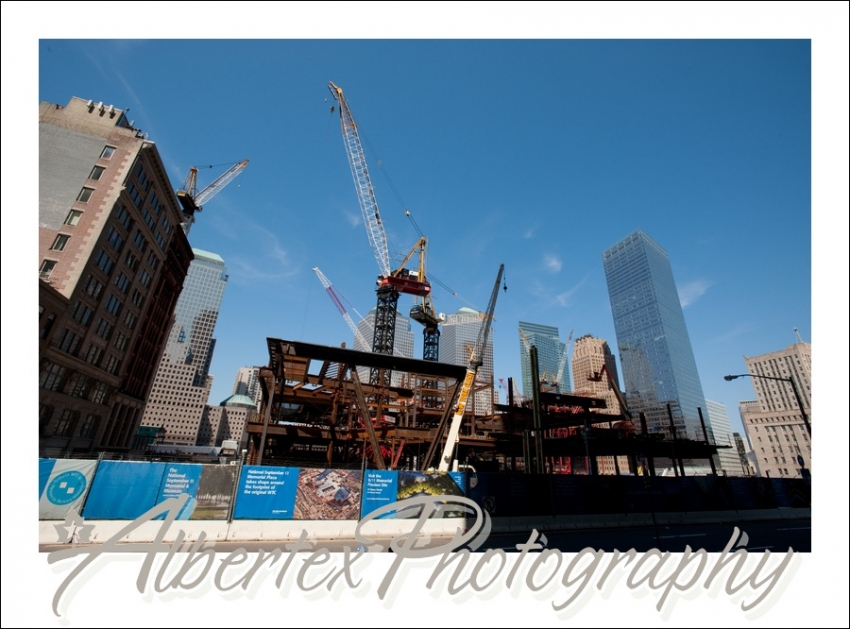 After visiting Ground Zero we walked through Chinatown on our way to Katz’s Deli, one of the more famous delis in NYC.  It is the deli from When Harry met Sally where Meg Ryan’s character Sally, shows Harry how much she is enjoying “it” and the lady says, “ I’ll have what she’s having”.  Classic scene.  I had Pastrami, Tanya had a Rueben and we shared a bowl of matza ball soup. Everything was excellent. 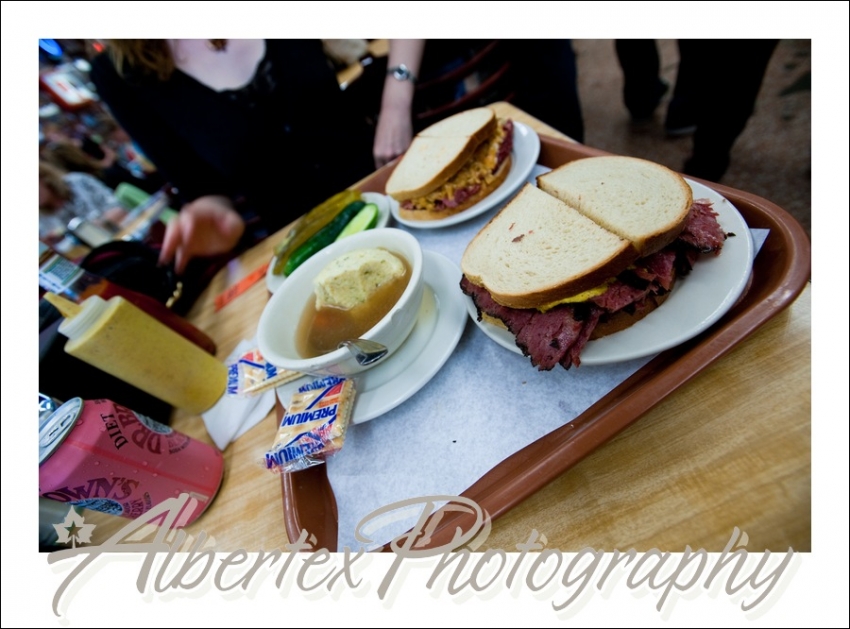 After lunch we headed back to midtown to wander through the area a little more. We got off at Grand Central Station again so we could walk past the Chrysler Building, then we headed back to Central Park and the huge Apple Store on Fifth Ave.  Not only was it Easter Sunday bit it was the weekend of the launch of the iPad so we needless to say it was packed and we decided not go in. Instead we walked through FAO Swartz as seen in the movie “Big”.

We decided to brave the massive crowds of Times Square, which is a huge melting pot of things to see and do.  After walking around for a while we popped into street side café in a hotel.  We ordered some appetizers and cocktails and had some fun just sittine back and people watching – we were also quite surprised to notice the giant Lichtenstein that decorated the lobby of the office building across the street.  Speaking of watches.  We frequently saw “vendors” that had a bed sheet wrapped like Santa’s gift sack.  They would stop, put the “sack” down, untie it and lay out a collection of “designer” purses or watches or tube socks to sell.  Our favorite vendor to watch was the watch salesman who had his small briefcase of watches set on top of 2 milk cartons.  Interesting to see how fast they could roll up their purses and hide their watches when the authorities came close. We sat there for a couple of hours.

We found a wonderful Italian restaurant and had dinner then walked to around a little more.  We probably walked 5 to 8 miles a day (yay for sort-of fresh air and exercise!).  It was my first time to not see a Broadway show while visiting New York which was kinda of a bummer – I guess we will have to buy tickets before we go next time.

Our last morning in New York we wanted bagels for breakfast – there’s nothing quite like a New York bagel loaded with cream cheese – yum!  We bought a couple of bagels from a place near our hotel, picked up some coffee at a coffee place we had also been eyeballing, and we were off the Rockefeller Center to eat our bagels and drink our coffee.  While we were there we had our first and only celebrity spotting – Kathy Lee Gifford and Hoda Kotb from the Today Show walked out of 30 Rock and headed across the street.  We finished our bagels and coffee and headed back to the hotel to finish packing and head home.  We had a great time (and it is probably the closest we will get to a vacation this year), and can’t wait to go back!

Added by Tanya:  We saw this sign and I had to get a pic of Bill in front of it. Anyone who knows Bill has probably heard him at some point say the work “luscious” – in a very sarcastic tone, of course  🙂

Our Empire State of Mind – Part 1

While most of you spent Easter weekend hanging out with family and friends, we headed to New York to photograph an event for the Scottish Tourism Board. We had a good time at the event, then got to spend a few extra days seeing some of our favorite sites in Manhattan. So, to revisit my love of travel logs, here is part 1 of 2 for our trip to New York.

Our trip got off to a great start when we arrived in NYC on Friday afternoon and all our equipment arrived in perfect condition, including the equipment we had shipped to our hotel earlier in the week.  After getting in touch with the event organizer to confirm everything for the next day, we decided to get out and walk around.  One of our missions was New York pizza.  We found one and had a slice of Italian sausage and it was very yummy.  Next we headed to the MOMA since it was open late, only to find that they had free admission that evening and the line wrapped around the building.  Well, we weren’t about to waste our first evening in NYC waiting in line so we opted to keep walking.

Next up was to find a street vendor with a knish – it was the first one I’d ever had and not too bad for a street vendor.  Our next destination was Rockefeller Center when Tanya noticed the International Center of Photography on the Avenue of the Americas.  I had known about the Center for years but had never been to it.  We did not have time to see the exhibits but we went to the gift shop – so many treasures, so little time.  After our slight detour we were off to Rockefeller Center, home of NBC.  Since I am an Olympic pin trader I was looking for some NBC Olympic pins and I was not disappointed.  I found a nice selection of Vancouver 2010 pins on sale – even better!

For dinner we lucked into a Japanese Noodle house that was a few blocks from our hotel – Udon West on 45th (between Lexington & 3rd Ave).  We had 2 Yebishu Beers (a brand I had never had before) 2 appetizers and 2 entrees, all for $36.  The food was delish and the price couldn’t be beat – Tanya, the budget lady, was very happy.

Saturday morning we were up bright and early for the gig in Central Park.  It was for the Scottish Tourism Board for Scottish week in NYC.  Saturday was a 10K run put on by the New York Road Runners.  We arrived at the entrance by the former site of the Tavern on the Green Restaurant at 7:15AM (which is pretty early for us :). Since we are not morning people, neither of us had ever been in Central Park that early on a sunny morning, and we are glad we had a reason to be there – it was beautiful!

There were tents set up for the vendors and we found our location right next to face painters who were painting Scottish Flags on faces or arms.  Tanya and I were some of the first ones to get one.

We were ready to go as the first racers started to arrive.  We photographed until the race started at 10 AM then had a bit of a break during the race.  We took a few photos during the race, but when the race ended about by 10:45 we were non-stop again until 12:15.  Stephanie and Laureen from the Scottish Tourism Board were great to work with and they were very happy with the photos.

After packing up and getting our extra equipment to FedEx, we decided to try the NY style pizza place recommended to us by one of the doormen at the hotel.  Next stop was the International Center of Photograph (I know it’s hard to tell, but that is the ICP across the street behind us).

Among the current exhibits was the work of Czech photographer, Miroslav Tichy.  He has a voyeuristic style that emphasizes the distortions and irregularities that are possible with manipulations to his own equipment.  He uses a variety of homemade and adapted photographic equipment, such as lenses he ground down on plexiglass using toothpaste.  They also had an exhibit with French Surrealist-era photographers including Man Ray, one of my favorite photographers.  Of course we had to make another trip to the gift shop while we were there.

After a quick venture into St Patrick’s Cathedral on 5th and a not-so-short nap at the hotel, we wandered around Midtown until found a restaurant where we could sit and enjoy a leisurely dinner.

Check back in a few days for Part 2 of our trip to New York (and some details on my upcoming trip to France!)