Tanya and I have shot old time costume photos for 30 years.  Steampunk made sense to us since we already had costumes, we just needed the right props.  Combining our greenscreen experience and costume knowledge we have been able to do some very fun Steampunk events and also with our photobooth that we can set up as Steampunk.

In March we had our photobooth at Alisha & Dean’s Clockwork Carnival Cabaret Wedding in Azle. We were in our own 10×20 section of a very large tent. It was a lot of fun and the party went late into the evening. So many people were dressed up in Steampunk and A Clockwork Orange outfits, it made the photos look great. Thanks to the groom’s brother and sister in law Andy and Cassandra for their great set of photos.

We have also been at some of the DFW areas larger Steampunk events and look forward to this years Steampunk November in Venus. 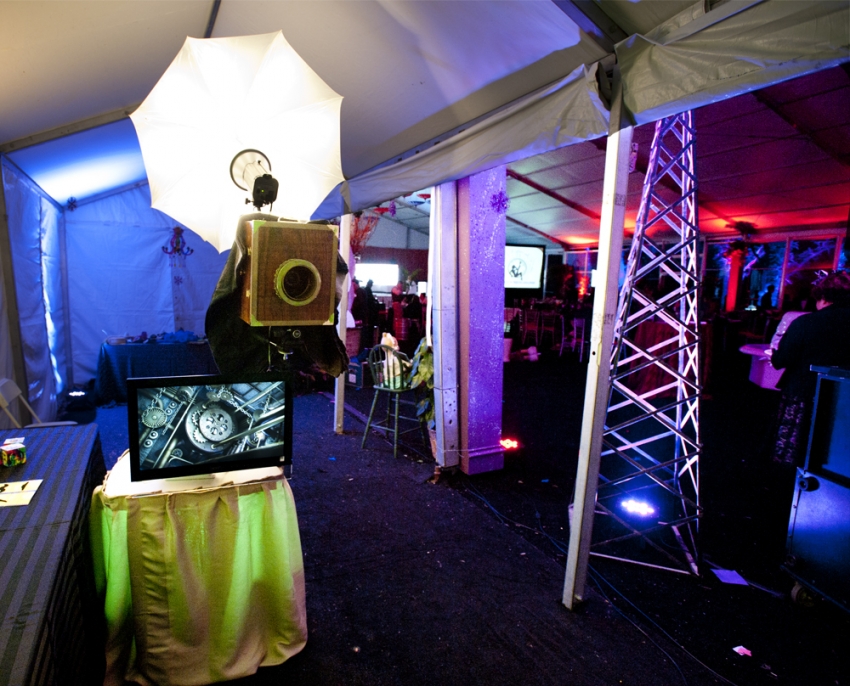 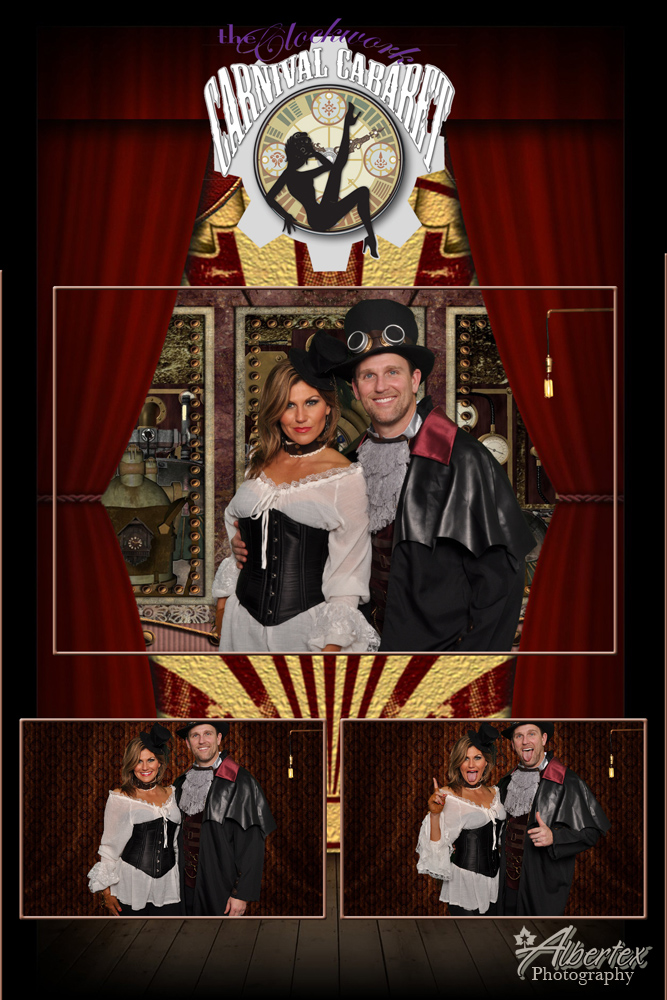 Andy and Cassandra at the Clockwork Carnival Cabaret Wedding 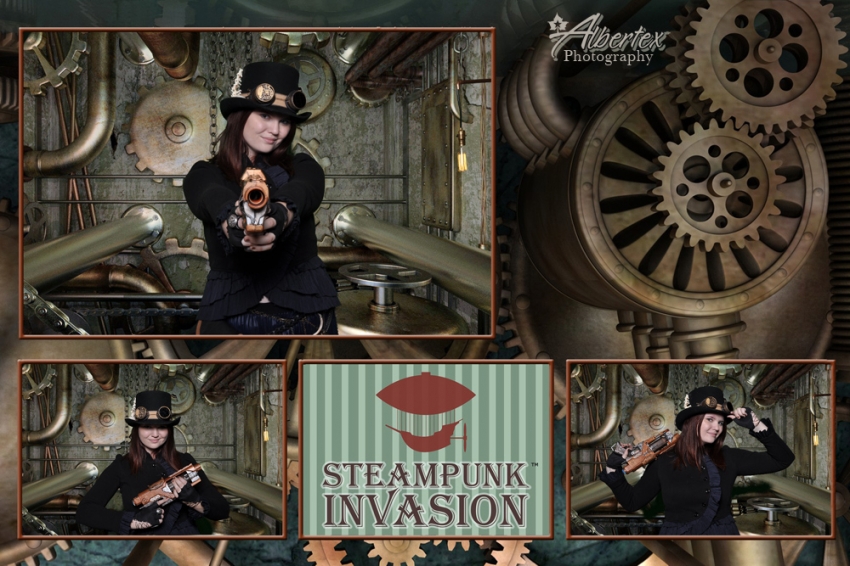 Lindsay at The Steampunk Invasion.

The Doctor visited us at the Steampunk November.

Tanya and I met at the Antique and Amusement Photography Convention many years ago, and 10 years ago I proposed to her in Mesquite, NV on the last night of the convention.  This year we entered 7 photos in the photo contest and received 6 ribbons, including an award for technical excellence! Here is our photo of the beautiful Flossie Carmichael from a series of images we did for the February 2013 cover of Sugar Heart Magazine (it also won an honorable mention in the Boudoir category):

Next was our 1st place image in the Chromakey category.  The main photo was shot on a green screen and the background photo is the Scat Club in downtown Fort Worth.  The composite photo was created with a specialty event software we use that automatically knocks out the green screen – there is no Photoshop used here.

For Best Portrait in Any Other Era, our photo of Tiffany took 2nd place.  Tiffany is a local pin-up model who we did some portfolio work for and her plans include moving to England so we thought the luggage would be a perfect addition to her look.

Next up is Erin, whose vintage 1950s Diner calendar won 2nd place in the Best Digital Border Poster.

Finally, as our family and friends all know, Tanya and I try to get creative with our Christmas card every year. for 2012, we were inspired by our growing Pin-up business so we decided to do a card that was our version of a cross between a Hummel figurine and a Norman Rockwell painting.  Our card won 2nd place this year, but what means the most to us is how many people sent us notes to comment on how much they loved our card this year!

We headed down to Houston the other day to shoot the 2nd of two events for Blackberry the year – what a super-fun company to work with!  And to top it off, their phones ROCK!!!  A great time was had by all and we loved working with Ange and Mike with Blackberry.  Ange flew down especially for this event from Blackberry’s headquarters in Ontario, and you all know how much I love to work with fellow Canadians :).  A HUGE thanks goes to Hope with Premiere Global Sports for hiring us for their events here in Texas – can’t wait to work with you again!

The 2011 AAPI Convention and Trade Show has come to a close and we are excited to have 5 images that took first place in their categories!  The AAPI Convention focuses on themed and event photography, and anyone who knows us also knows how much we love any type of vintage photography.  While we spend most of our time on weddings, we relish the opportunity to stretch our creativity and think outside the box, and Vintage Photography does that for us.  Our top 3 First Place winners (by Category):

Most Creative, Non-Digitally Enhanced.  That’s right, no photoshop allowed – fits perfectly with our motto of “Shoot it right the first time, Don’t fix it in Photoshop later” 🙂  This is the 4th year in a row that Albertex Photography has taken first place in this category, and we are very proud of that.

Self Portrait – this was Bill’s pet project this year and was printed as a Lenticular photo.  We have put it on the blog as a gif to give you a rough idea of what the final image looked like.

Some of our other favorite images that won ribbons:

Digitally Enhanced – digital enhancements included placing the pirate on the boat, turning on the light in the lantern, and placing the eclipse moon in the background.

Other Era (ours is a World War II Pin-up image)

Macy’s at The Parks at Arlington ~ Sean John Celebrity Appearance

Having spent most of the week hiding from the icy weather, we are excited to be heading to the Macy’s at The Parks at Arlington this afternoon for some fun in the Men’s Department.  No, we won’t be shopping – we will be photographing lucky shoppers with rapper Rick Ross.  The promotion is in conjunction with the Sean John line of apparel, and shoppers who purchase $50 or more of Sean John will get a chance to meet Rick Ross.

Today’s promotion will be in the Men’s Department, Level 2 at The Parks at Arlington from 2-4PM.  See you there!  See this blog post at on Sean John’s website for more info.